Harrisburg – A group of lawmakers and advocates unveiled a bipartisan package of legislation today overhauling Pennsylvania’s methadone treatment laws to increase fiscal accountability and safety, and reduce the unlawful use of methadone and methadone poisoning deaths. 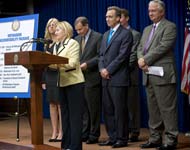 “The state methadone program is spending tax dollars for open-ended treatment with no accountability or oversight,” said Senator Ward. “It’s incredible that with so many lives – and tax dollars – at stake, no state agency has bothered to do an audit. I want to know what the state is spending and what it can do better.”

The measures making up the Methadone Accountability Package address the illegal diversion of methadone from treatment uses; methadone use and highway safety; and accountability in government-sponsored treatment, including cost to taxpayers, open-ended treatment, overdoses and deaths.

Senator Eichelberger noted that guidelines in Pennsylvania covering methadone clinics are found only in regulation.

“Pennsylvania’s law has not kept pace with the changes in the prescription of methadone—and too frequently with deadly consequences,” said Senator Eichelberger. “Methadone is a drug with its own unique properties. One pill or one dose can kill a non- or low-opiate-tolerant person. Even a day or two after the drug is taken, it has lead to fatalities for those who mix alcohol or other drugs.”

The National Drug Intelligence Center reported a 109 percent increase in the unlawful diversion of methadone from 2003 to 2007. The National Center for Health Statistics found that, from 1999-2005, the number of poisoning deaths involving methadone increased 468 percent, and the rate of methadone deaths in younger individuals (age 15 to 24) increased eleven-fold.

The increase in methadone use and abuse has also affected highway safety. The National Highway Traffic Safety Administration found that a single dose can cause reductions in reaction time, visual acuity and information processing.

“Pennsylvania needs better laws to prevent methadone abuse and provide patients with the proper protections and treatment plans they need to achieve a lifetime of sobriety,” Senator Stack said. “This package of bills is a solid step toward achieving those goals.”

“We are just starting to see the results of the new program, but indications are that both Indiana County and Cambria County will realize thousands of dollars in savings each year without reducing treatments or placing an undue burden on their clients,” Senator White said.